President Trump attended a rally in support of Republican Sens. David Perdue and Kelly Loeffler on Saturday, in Valdosta, Ga., ahead of a crucial runoff election that will decide who controls the U.S. Senate. 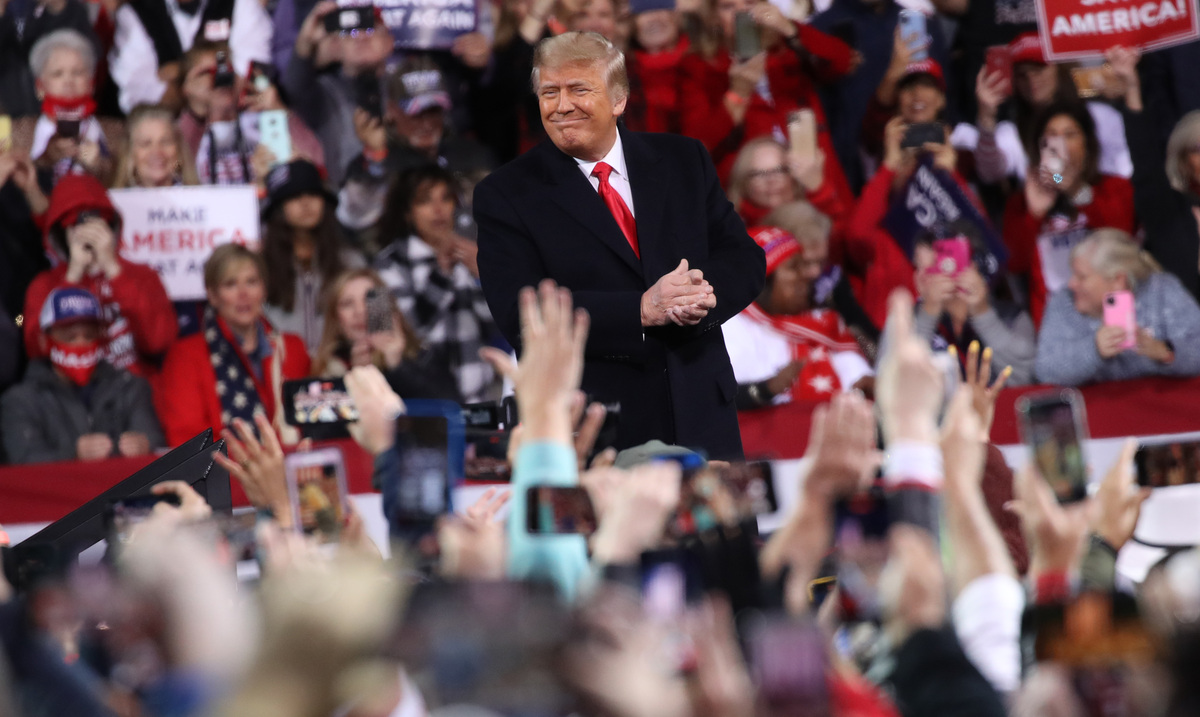 President Trump attended a rally in support of Republican Sens. David Perdue and Kelly Loeffler on Saturday, in Valdosta, Ga., ahead of a crucial runoff election that will decide who controls the U.S. Senate.

At his first campaign rally after losing the election, President Trump sent mixed messages to Republican voters in Georgia on Saturday night, repeating false claims that the election was rigged while encouraging them to vote in a Jan. 5 runoff that will decide control of the U.S. Senate.

Trump, who lost Georgia’s 16 electoral votes by about 12,000 votes after an audit and a recount, told the crowd in Valdosta near the Florida border that supporting Sens. David Perdue and Kelly Loeffler in the runoff would help shape the future of America.

“The voters of Georgia will determine which party runs every committee, writes every piece of legislation, controls every single taxpayer dollar,” he said. “Very simply, you will decide whether your children will grow up in a socialist country or whether they will grow up in a free country.”

He called Perdue and Loeffler “two of the finest people you’ll ever meet” and said they were two of his biggest supporters in Congress.

If the pair lose to Democrats Jon Ossoff and Raphael Warnock, the Senate would be split 50-50, with Democratic Vice President-elect Kamala Harris casting the tiebreaking vote.

Local and national Republicans have stressed the importance of the Georgia race as the last line of defense against a Biden administration agenda, with surrogates swarming the state on a daily basis. That included a visit by Vice President Mike Pence to Savannah on Friday, where he dismissed some calls from fringe voices on the right to boycott the election.

“I actually hear some people saying, ‘Just don’t vote,’ ” he said. “My fellow Americans, if you don’t vote, they win.”

But the president spent most of the night repeating baseless claims of election fraud in Georgia and other states, claiming falsely that he won Georgia, Wisconsin and other states certified for President-elect Joe Biden.

Election officials say the security camera footage, seized on by the Trump campaign as alleged evidence of election fraud, did not show any processes out of the ordinary. Georgia law does not require partisan monitors to be present for vote counting to occur, and law enforcement investigators with the secretary of state’s office found no evidence that improper ballots were added to the totals.

Trump also said that “phony, fake” mail-in absentee ballots were used to “sabotage” the election — and then gave supporters directions to request those types of ballots for the runoff.

Earlier in the day, Trump phoned Republican Gov. Brian Kemp to demand that he call the state legislature into a special session to overturn Georgia’s results and order an audit of the signatures on absentee ballot envelopes.

Kemp, who served as secretary of state for eight years, rebuffed the request for a special session. The governor reiterated in a tweet that he has called numerous times for a signature audit, which he’s said must be legally ordered by the current secretary of state, Republican Brad Raffensperger.

Raffensperger, who voted for the president but has stood up to the mounting pressure and misinformation about the election, said auditing signatures is not necessary since they were checked multiple times before those votes were counted. Further, he said an audit would not be logistically possible for local officials who spent the past month counting 5 million ballots three times.

Kemp did not attend the rally Saturday night after a young campaign staffer for Sen. Kelly Loeffler, Harrison Deal, and a close friend of the governor and his family, died in a car crash.

The Trump campaign has filed one of several lawsuits seeking to overturn Georgia’s election results, but so far no court has found evidence to warrant such a decision.